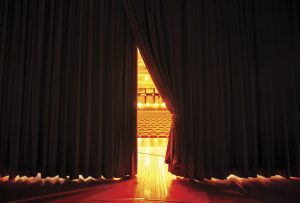 Spend a Night at StageCenter Theatre

Looking for a new date night activity, away from the hustle of campus life? Look no further than the community theatre. Located just a few minutes from our apartments in College Station, TX, StageCenter Theatre boasts a variety of shows all year long.

The History of StageCenter Theatre

StageCenter was founded in 1964 and was originally just a group of people that got together to read a variety of scripts. In the beginning years, performances were performed in multiple places throughout the community. The Hollow Crown by John Barton, performed in the MSC Ballroom of Texas A&M Campus, was the first official production. Throughout the years, the StageCenter Theatre has moved several times, and in 2018 settled in its current home at 218 North Bryan.

Performances of all genres have been performed in the all-volunteer theatre, including dramas, comedies, musicals, and even farces. These performances are brought to life by hard-working community members, putting in an effort to keep the theatre alive.

The next play, Murdered to Death by Peter Gordon, opens on April 4th and is performed every Thursday, Friday, and Saturday through April 20th. In this comedy, Inspector Pratt, a completely incompetent detective attempts to solve the murder of the theatre house’s owner. He bungles his investigation and fights against the odds to try to bring the murderer to justice. Will he succeed? Or will others meet their end? This play promises and delivers a good laugh for the audience.

If you are new to live theatre, you are sure to find live performance quite entertaining. Local actors work hard and are quite good at bringing their characters to life. The performance usually provides an array of emotions and leaves you on the edge of your seat, eagerly awaiting what happens next. Get your tickets for the next performance before they are sold out. You’ll find yourself delightfully fulfilled when you leave the show.

Contact us today to learn more about College Station and Rise at Northgate.